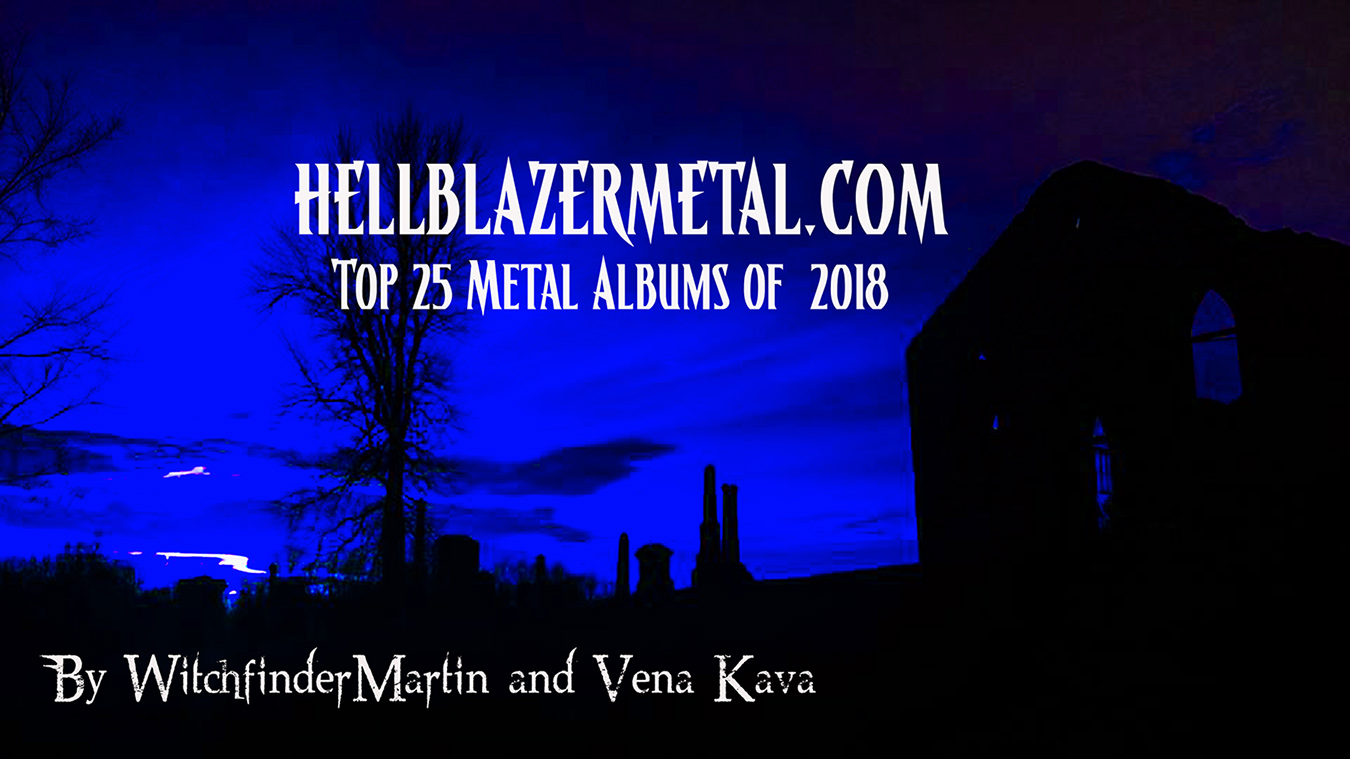 Greetings to all!  The time has come for us to publish our long awaited list for the Top 25 Metal releases of 2018, put together again this year by Hellblazermetal.com founders WitchfinderMartin and Vena Kava.  2018 was another extremely solid year so the task was a long and difficult one.  Same as last year, we are sticking to «regular» release formats, therefore excluding EPs, live albums, compilations, split-albums, etc.  We also realize that between the two of us, some releases have slipped our fingers so we look forward to your comments about our selection, along with suggestions of stuff we might have missed.  We hope this list will allow you to discover a band or two.  Please feel free to help us out and share on any media of your liking!   Happy New year to all!  Stay Metal and support the underground!

Veteran Death-Thrashers Deceased are back with new tales of horror on «Ghostly White».  Another solid effort displaying amazing songwriting, with neck-breaking riffs and superb twin-guitar melodies.  Another fun release from King Fowley and the boys.  On a sad note, this also marks the last performance of drummer Dave Castillo who passed away a few short days before the release of this album.  RIP Metal brother, your memory shall live on!!

A solid second full length from this Chilean Traditional Heavy Metal group.  These guys are on the rise and are surely securing their spot at the top of the so-called «NWOTHM» movement. 80s Metal fans, do yourself a favor and check these guys out!!

With this new release, Demonical showcase a redefined sense of melody without losing their aggressive edge and the result is a splendid slab of Swedish Death Metal.  Crushing and epic!!

The old school Death Metal maniacs from Québec are back with only their second album, but already, they are forging their place amongst the greats of the genre.  Many new bands go for the old school approach within Death Metal, but very few accomplish what these guys have done so far in their short career.  They truly master this and the future looks extremely promising for the old province quartet.  Bravo les gars, ça rentre en tabarnak!!

Another band that has already reached impressive heights with only two albums under their belts.  The American Black Metal band is deservedly making appearances in many «top of 2018» lists all over the internet, rightfully so!  A perfection continuation of their great debut album.

Maybe not everyone’s cup of tea, but we really like what this band has become.  These Swedish Gothic Dark Metallers have a way of writing extremely catchy music.  Each of the two guitar players has a very distinctive style and tone,  and the two work perfectly well together.  Their songwriting skills have reached a career-high, appealing to fans of extreme Metal as much as fans of softer music.  Dark and beautiful.

Although formed more than 10 years ago, we had to wait until 2018 for a first full length from these Turkish Death Metal masters. An impressive release, with long intricate compositions, but without overdoing things in regards to technicality.  Old school, catchy and intelligent songwriting.  The Death Metal scene is on the rise in Turkey, things are getting exciting and Burial Invocation are at the forefront of this movement.  Do not miss out on this!  One of the best debut albums in recent years.

Already a fourth album from the Swedish Black Metal horde.  This time around, the sound is extremely raw (a perfectly controlled and intentional affair), delivering cold and primitive Black Metal in the vein of early efforts by Satyricon, Darkthrone, Ulver and Borknagar, while still adding their own twist and identity.  Superb work, for fans of the old ways.

17- UNLEASHED «The Hunt for White Christ»

No introduction needed for the originators and absolute kings of Viking Death Metal.  The warriors are in great form, and continue on from the formula of the previous album.  Their music has become more refined and intricate these past few years, with more arrangements and atmospheres, while still delivering uncompromising traditional Swedish Death Metal.  Let the hunt begin!!!!

They have finally returned, and the wait was not in vain.  Very intricate and intelligent approach to True Black Metal, proving that they deserve their place at the forefront of the massive Swedish Black Metal scene.  We did not expect them to disappoint, they proved us right!

American Death Metal mastermind Erik Rutan managed to unleash another impressive intense release with «Upon Desolate Sands».  This album offers everything that makes this project great and more.  Relentless and brutal, yet balanced and well-paced.  An ultimate display of highly sophisticated and intelligent playing.  Astonishing!

14- PRIMORDIAL «Exile Amongst the Ruins»

The Celtic bards are back with a vengeance on this beautifully crafted opus.  As epic and accomplished as the Irish clan got us to expect and hope for.  It would appear these guys can do no wrong, as they truly stand proud on the highest of mountains within the vast world of Pagan Metal.

With «When the Night Falls…», the Ukrainian one-man project is back again with a new album in 2018, following the impressive 2017 release «Forestpaths» which had also made its way to our «best of» list from last year.  Majestic and beautiful, this is as good as Atmospheric Black Metal gets.  Mesmerizing and enchanting…

Ever since they reunited a few years ago, Satan have succeeded where many of the still active 80s Metal Bands failed in modern times: keeping the original flame burning with an intact formula.  This new spell «Cruel Magic» is no exception and follows a line of recent amazing efforts that are 100% in line with the band’s undeniable classic «Court in the Act».  A fine example of giving the fans what they want, and more!!!  The NWOBHM lives on!!!

The swan song for this mysterious Black Metal project from Finland…and what a way to go!!  Grandiose and atmospheric, with perfect production for the genre.  Ghostly, eerie, fascinating and beautiful.  Impressive work of alchemy that all Black Metal fans should be on the lookout for.

The legendary cult band really hit hard this year with a stellar release.  Rare will bands release such defining records so late into their career.  This output is definitely one of their strongest in an already very impressive catalogue.  Rulers of the Blackened Swedish Death Metal world, this is Necrophobic on top of their game!

Expectations were high, but we are willing to admit that they have been surpassed.  Demonaz showed the whole world that he is, and has always been part of the spirit and entity that is Immortal.  This album is pretty much a tribute to all the great moments from past albums, with a welcomed return to the old grim and frostbitten ways.  Much superior to what former member Abbath is doing on his own.  It is always such a great moment when a legendary band comes back from hiatus with such a mighty release.  Blashyrkh shall never fall!

Now that is what classic old school Death Metal fans want!  This album is so much fun and easy to get into, with amazing hooks and headbanging catchiness.  A true tribute to the old days of American Death Metal (with also a few elements from the old Dutch and Swedish scenes). Amazing production, awesome artwork by legendary Dan Seagrave, this album has it all.  If you like late 80s/early 90s Death Metal, you can’t go wrong with Skeletal Remains.

Following a highly impressive first full length and an EP, the time for Délétère to take the throne has come.  This is by far the best Black Metal album to come out of North America in 2018.  Délétère can now be considered world leaders and a force to reckon with.  From the lyrical content to the atmospheres, this surpasses all hopes and truly contributes to securing the Québec Black Metal scene a place at the very top of the realm.  Vous nous rendez forts et fiers! Bravo et merci!!!

Arioch had us wait nine long years before spawning this evil masterpiece upon the dark world (understandable, fronting Marduk is quite a full-time commitment).  Intense, blasphemous and disturbing Swedish Black Metal.  Highly sinister atmospheres, at times delightfully unsettling,  but always beautiful.  This album is hell on earth.

Well we are truly lost for words when it comes to the Norwegian formation Whoredom Rife.  Quite simply, their adventure so far has been absolutely impeccable.  Two full lengths and one EP in only two years, with absolutely nothing short of perfection within their execution.  The quality that this band manages to achieve is at a level that rarely gets reached so early into a musical career.  All Black Metal fans should check these guys out.  For a second year in a row, they reach our top 5.  Nothing we can say can give this band the justice and respect they deserve.  Buy or die!!!

4- ATARAXY «Where All Hope Fades»

We are speechless as to why this album from the Spanish outfit did not make more «best of» lists this year.  This is Doomy Death Metal at its absolute best, with transcending atmospheric moments coexisting alongside crushing old school Death Metal.  Do not miss the opportunity to walk the path of Ataraxy, it literally will lead you to a place where all hope fades!!!  Mystifying masterpiece.

This is one of our favorite bands but newcomers to their art will also bow down to the majesty that is Helrunar.  German Black Metal with Pagan elements, with massive production and hard-hitting compositions.  Some of the best vocals in all of Black Metal, and those riffs…wow!  A legendary cult band that should not be missed by any extreme metal fan out there.  This is Black Metal for the elite, as strong as it gets!

Celestial Symphonic Black Metal, an art  form not many bands tend to venture towards nowadays.  Vargrav offers quite possibly the best debut album since the early days of Black Metal.  This is majestic and beautiful.  An album that will make you reach for the stars and gaze at the moon.  Grandiose orchestral work from this one-man band from Finland.

Already a fifth album from the Swedish Darkened Death Metal outfit, on which they display mature songwriting and perfect execution.  What Vanhelgd do is hard to accomplish as they manage to achieve greatness within a fairly simple (and somewhat atmospheric) approach to Swedish Death Metal.  A perfect example where «less is more», with each musical idea developed and morphed into pure genius.  We truly feel that each riff is carefully selected and each passage has its own merit.  This is our favorite album of the year.  It grasps the listener from the very first listen and never lets go.  Brilliantly accomplished work. 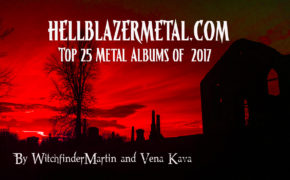 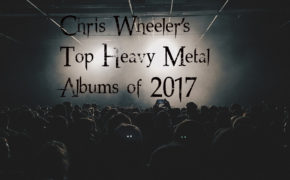