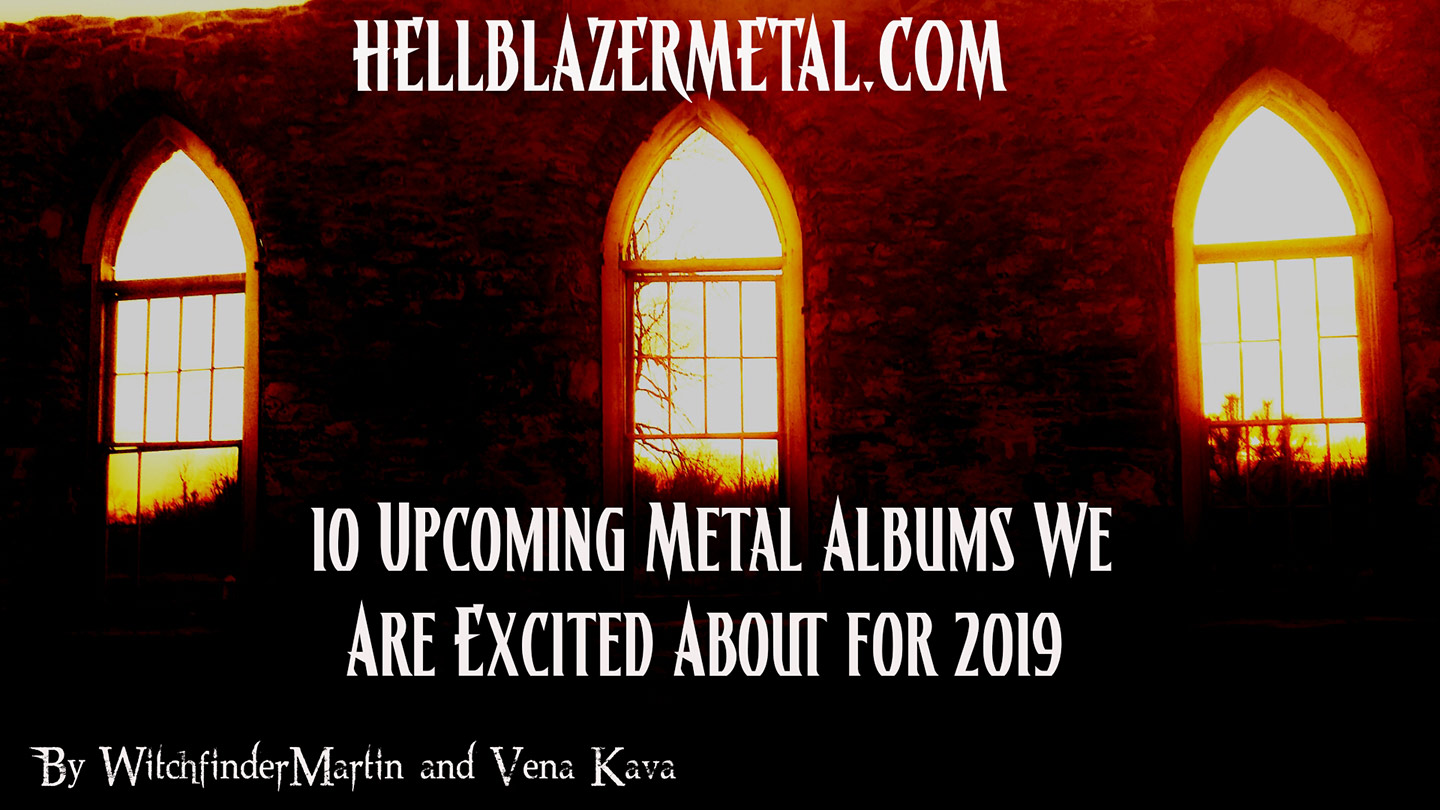 10 Upcoming Metal Albums We Are Excited About for 2019

With 2019 now upon us, we figured it could be a good idea to start on a positive note and share a list of 10 albums we are looking forward to (or at least hoping for) in 2019.  Some of these bands have already announced upcoming releases, some are leaving us hanging a bit.  Whatever the situation may be, 2019 should be another enormous year for Underground Extreme Metal (which we usually focus on) and Metal music in general.  No particular order of preference for the bands listed below.  We hope you enjoy and please feel free to add your comments and share your suggestions. This is WitchfinderMartin and Vena Kava raising our horns and saluting you all from cold Montréal, QC.!

The new kings of Occult Death Metal will hopefully be back with a full length release in 2019.  This band has been conquering the whole world these past few years, supporting their astonishing last full length «Promulgation of the Fall» as well as the more recent EP «Sombre Doom».  We have high hopes and expectations for what comes next from the Greek masters of darkness.  The next album could crown them as absolute leaders of obscure extreme music.  From the studio to the stage, these guys are second to none and have a very promising future ahead of them.

The Belgium lords of Satanic Black Metal will be back in 2019 with a newly signed record deal with the well-established Season Of Mist.  We can hardly contain our excitement, as this legendary formation has never let anybody down in the past.  They did scare us when they announced the departure of founding member Lord Sabathan a few years ago, but it did not take long for Nornagest to put everyone’s concerns to rest when taking over the controls with a series of amazing albums ever since.  Already five years since the extremely solid last record «Sovereigns», the beast will be back in 2019 to put the world to flames!

Now this is an act that has been silent for a very long time, their last full length «Structures of Death» dating back to 2007.  Fans of old-school Death Metal rejoiced when the band came back in 2016 with three new songs on a split album with another German Death Metal group Skinned Alive.  According to what they recently shared on social-media, they are working on new material.  We can only expect crushing greatness from these legends of the old ways.

Purveyors of Satanic debauchery, Carpathian Forest came back from a long hiatus in 2018 with an EP entitled «Likeim» (which consists of one new song and one Turbonegro cover).  The new song (the EP’s title track) is solid and fun to listen to.  Let’s hope the new album arrives soon and that they come back grabbing the world by its throat with a lesson in True Norwegian Black Metal.

A bit of a different vibe for this entry, but we just love this band so much.  True leaders of the so-called NWOTHM movement, this Swedish outfit has been amazing for the realm of traditional Metal since their 2008 debut «Into the Night» which had followed the now cult multi-band split-releases «Speed Kills…Again» and «New Age of Iron Vol. 1 – Teutonic-Swedish Alliance».  Pure Heavy Metal is stronger than ever now and this band is at the top of the mountain.  The new album should arrive soon, having originally been announced for 2018.  However long it takes, we will be here waiting to raise our fists and headbang ‘til we bleed with the mighty Enforcer!!!

We are really not sure if these Death-Doomers from Finland are working on new material, but we sure hope they are.  Their last 2016 album «Remnants of Expansion» was perfection and nothing less.  Within the vast world of Primitive Doom-Death Metal, Krypts have found their own path and they can already be considered as leaders in the genre.  For all of those who are not yet familiar with this outfit, drop everything this instant and go check them out, and get ready to be engulfed by darkness.

As it happens, 1349 have just released a new single this week, entitled «Dødskamp», commissioned by Innovation Norway, Visit Norway and the Munch Museum as part of a project involving four Norwegian artists with completely different musical backgrounds paying homage to the famous painter Edvard Munch.  The result is a very solid track showcasing all of their abilities.  We now have more reasons than ever to be excited about things to come for this Black Metal powerhouse.  It sure has been a long wait since «Massive Cauldron of Chaos», but the new album should finally be upon us sometime in 2019.

Sanctuaire is a solo project put together by Monarque Helserkr, the leader of the amazing and well established Québécois Black Metal band Monarque.  Accomplished and versatile musician and performer, Monarque Helserkr shows his appreciation for Epic Black Metal as much as Ambient music within this very interesting and fairly recent project.  So far, we have been blessed with three EPs, along with split and demo releases.  This new year should allow us to appreciate upcoming releases in both Epic Black Metal and Ambient music from the mastermind and long-time architect of the Métal Noir Québécois movement, so much music to look forward to.  À suivre…!!!

The world has been a much darker place since Grave Miasma have unleashed their debut EP «Exalted Emanation» back in 2009.  Since then, and all the way to their latest 2016 release «Endless Pilgrimage», their discography consists of three EPs and one full length, and so far, everything they have done is pure magic.  Such dark and evil sounding Death Metal from these British lads.  Let’s hope 2019 brings forth new material!

Another band that can do no wrong, one of our favorite bands ever actually!  Now that a new (amazing!) Helrunar has come out, let’s hope that the boys will find time in their schedule to work on some new material for this brilliant Pagan Black-Metal project.  The last full length from this collaboration of Icelandic and German performers dates back to 2014, the impeccable «Aldafǫðr ok munka dróttinn», which was followed by another near-perfect release in 2016, the «Heljarkviða» EP.  Any fan of Pagan Black Metal should check these guys out.  For more details on the nature of their music, you can check out our review of their last EP in the Hellblazermetal.com «reviews» section.